Mural Paints for interior and exterior applications.
A palette of 36 exterior grade, 100% acrylic, architectural coatings, formulated with pure, artists grade pigments for clean colors with excellent color retention. Making the best paint to ensure the long and healthy life of your mural. 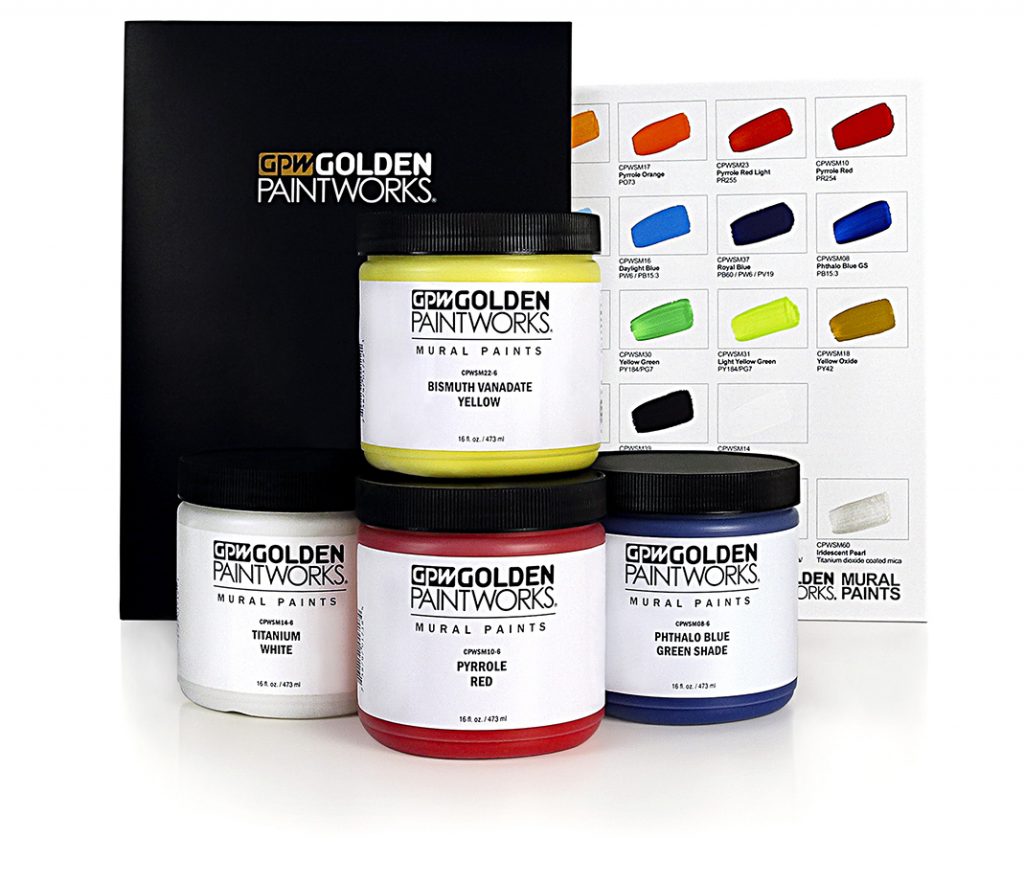 This small starter kit includes 16 oz. containers of Bismuth Vanadate Yellow, Phthalo Blue Green Shade, Pyrrole Red, and Titanium White. With the basic colors in this set, you will be able to mix a wide range of colors and complete a 150-200 sq. ft. mural. 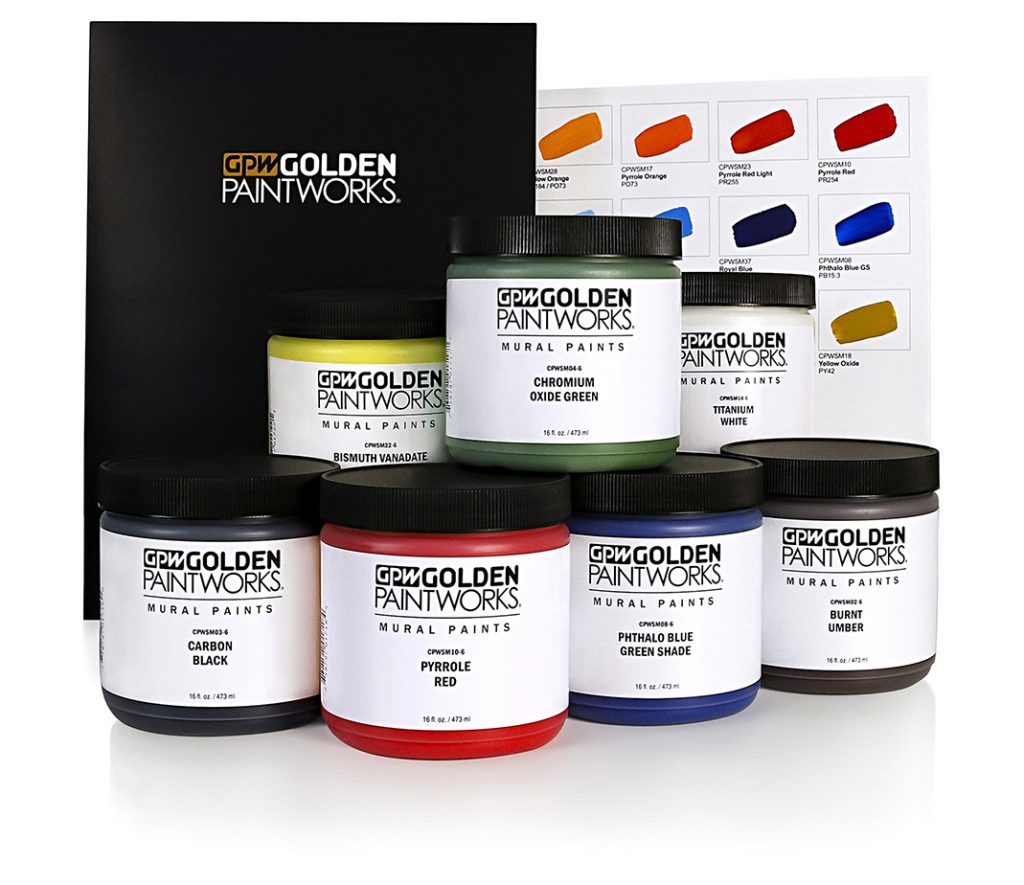 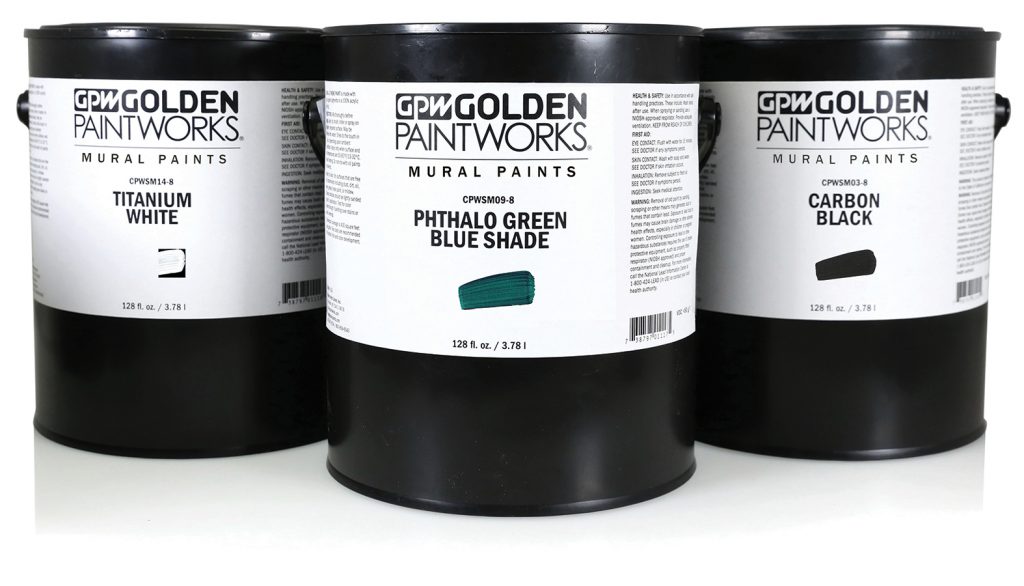 Recommended for murals 1500 sq. ft. and larger, GOLDEN Paintworks® Mural Paints are formulated with high quality artist-grade pigments, so the colors are strong, clean, and bright. Made with only the most lightfast pigments, Mural Paints are 100% acrylic, very opaque for good coverage, offer excellent leveling and dry to an even satin sheen. Brush, roller or spray apply. Available in Gallons – Free shipping within the Continental US.

For more purchasing information or application questions please email us at  info@goldenpaintworks.com.

Color Options (Recommended for Interior Use Only)

After your mural has been painted and is fully cured, we recommend taking additional protective steps to ensure the mural has a long, healthy life. Start with the optional Mural Isolation Coat followed by Mural Varnish with UVLS. 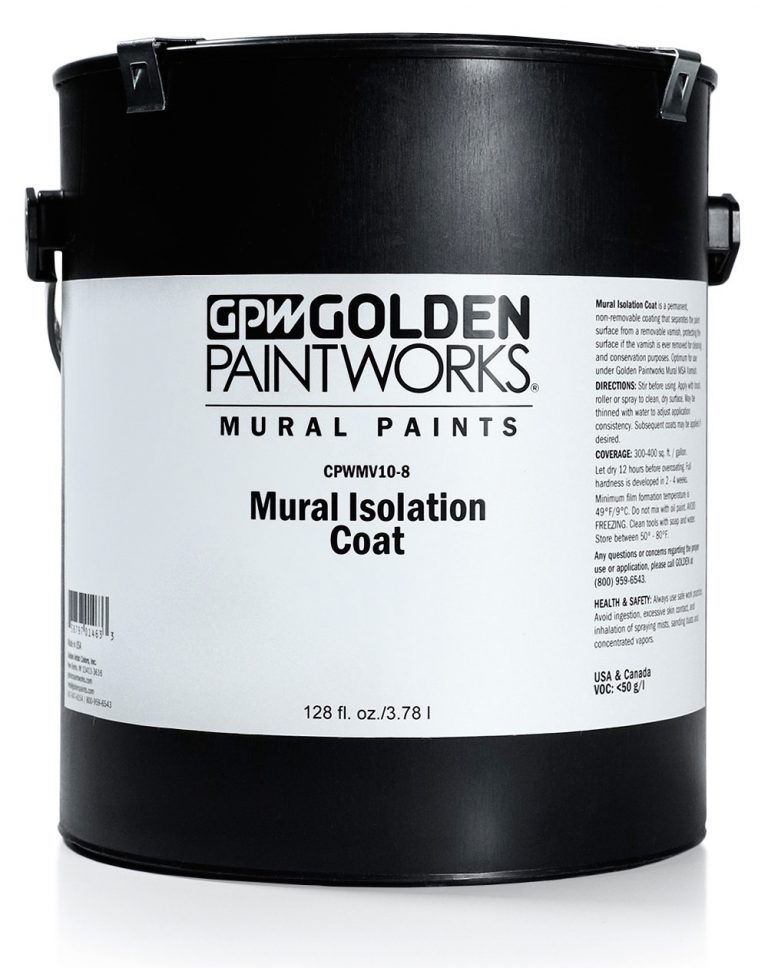 Golden Paintworks® Mural Isolation Coat is a permanent clear glossy acrylic layer that will even out the absorbency and sheen of the mural’s surface, allowing for easier application of the Mural Varnish. Additionally, the Isolation Coat acts as a permanent barrier to protect the mural against damage if the varnish ever needs to be removed. The Isolation Coat can be brush or roller applied. Available in Gallons. 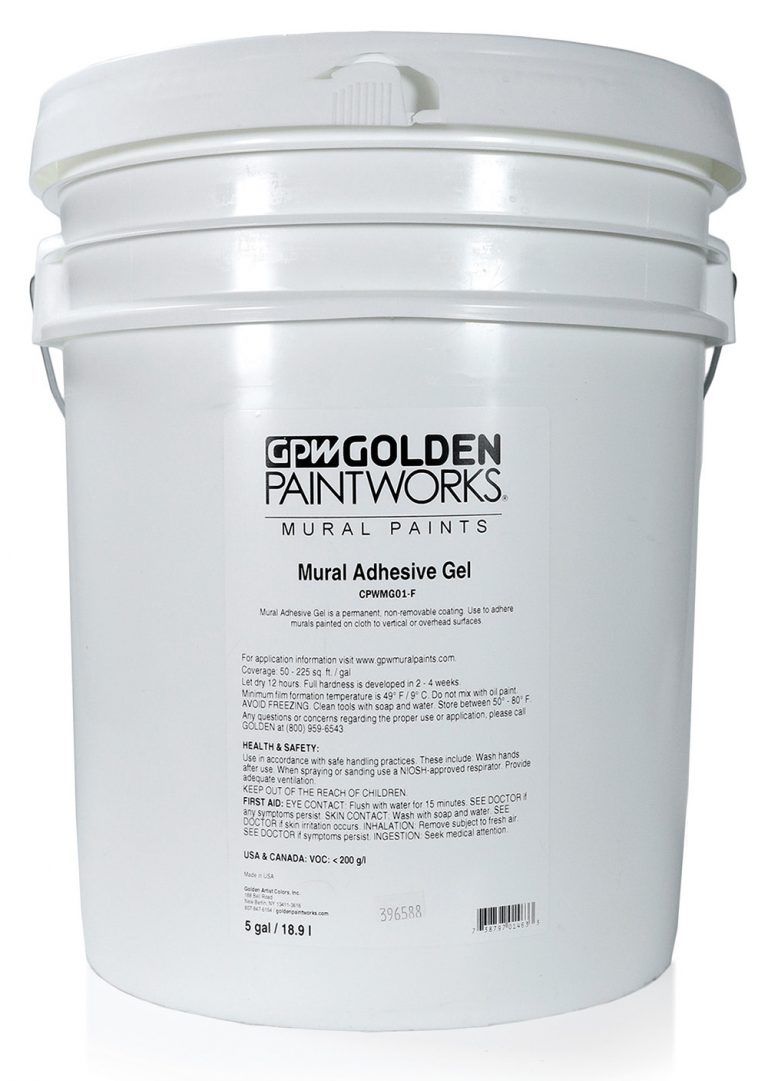 Golden Paintworks® Mural Adhesive Gel is an excellent adhesive with flexibility, chemical, water and UV resistance. Designed for adhering parachute cloth to the wall when creating a mural on sections of parachute cloth (non-woven fabric) for later installation. Available in 5 Gallon Pails. 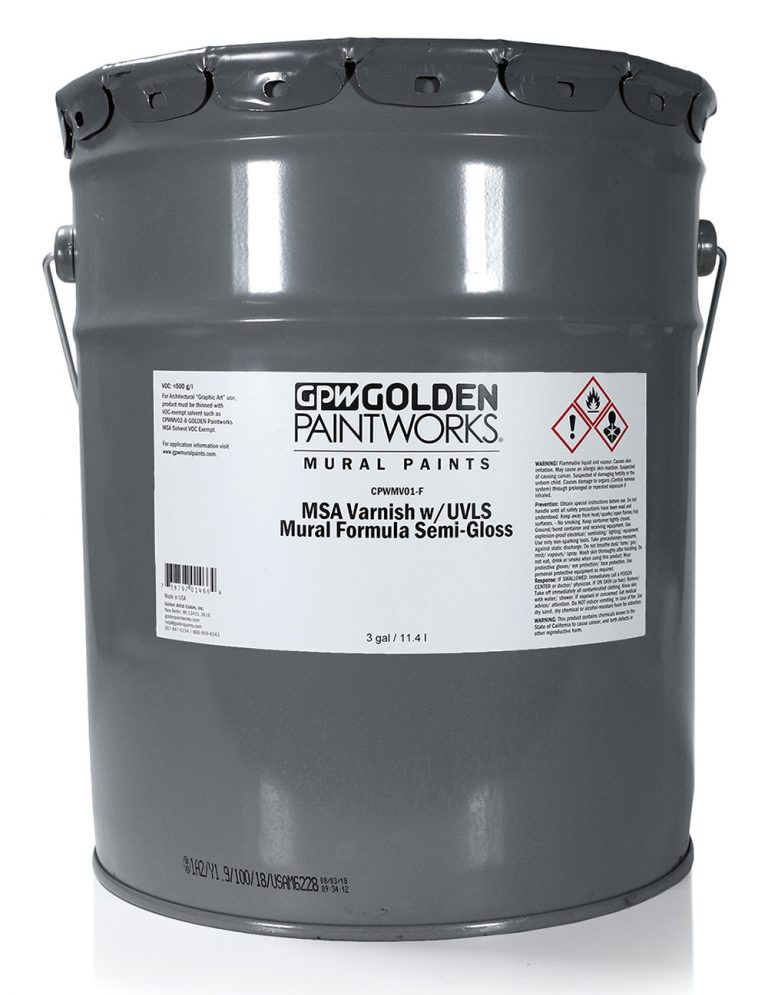 Golden Paintworks® Mural Varnish with UVLS (Ultraviolet Light Stabilizers) is a Mineral Spirit based Acrylic resin system that dries to a tough, yet flexible protective finish, protecting the mural against dust, dirt, marring and environmental conditions. The UVLS system provides increased resistance to the harmful effects of ultraviolet radiation exposure, helping to ensure the longevity of the mural colors over time. The Mural Varnish is a removable, VOC compliant coating available in a Semi-Gloss or Satin sheen. Mural Varnishes must be thinned with Mural Solvent before use. Available as 3 Gallons in a 5 Gallon Pail for Solvent Addition.

Pricing and Purchasing
For pricing and purchasing use the Order Now button below, or email info@goldenpaintworks.com. Once an order has been submitted you will be contacted for confirmation and payment during normal business hours. Please email us with any questions! 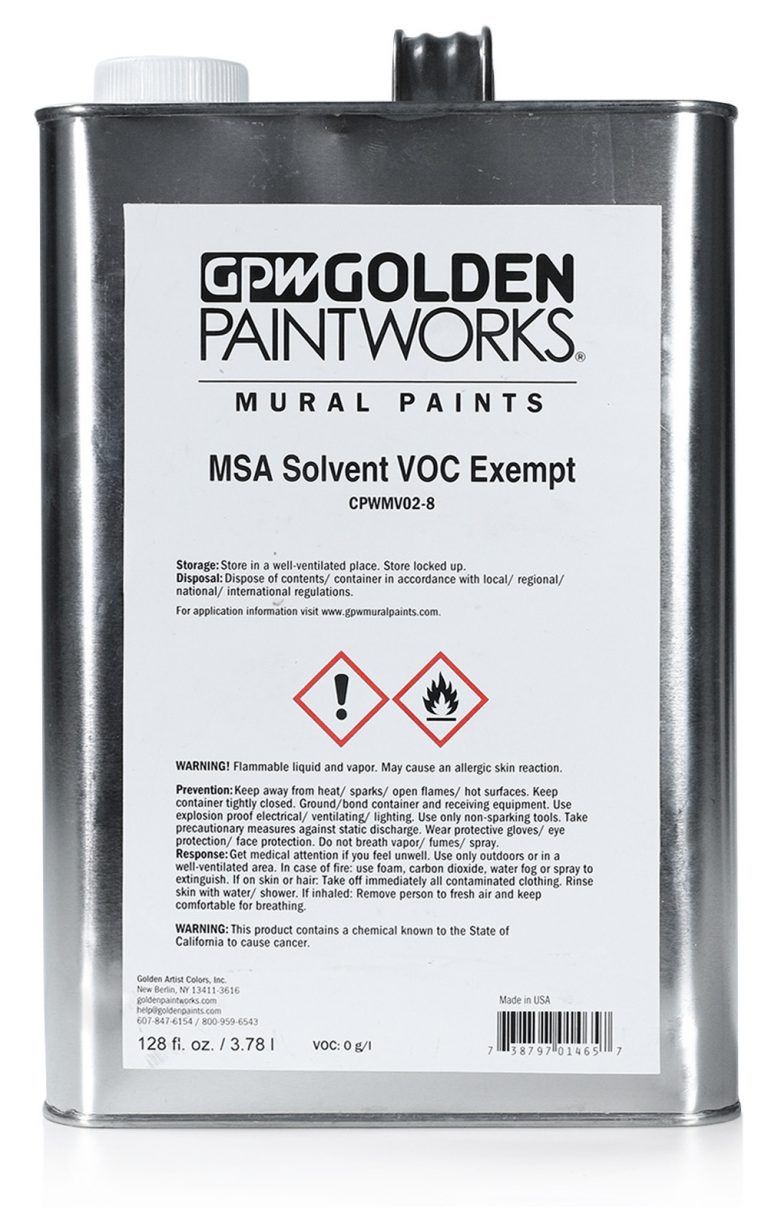 Pricing and Purchasing
For pricing and purchasing use the Order Now button below, or email info@goldenpaintworks.com. Once an order has been submitted you will be contacted for confirmation and payment during normal business hours. Please email us with any questions!

Supporting the Arts
2% of all Mural Paint sales are allocated to support non-profit Mural Arts programs and organizations with Mural Paint for their projects. This is one of the many ways Golden Artist Colors works to support its bold vision statement: “Our Company is a catalyst, bridging creative communities and inspiring positive global change through the arts”.

Our Rich History
Golden Artist Colors, and its commercial division Golden Paintworks, has a long history of working with mural artists and mural art groups, almost as long as the company itself. Best known as the premier manufacturer of artist-grade fine art acrylics, Golden Artist Colors had its origins in 1933 when CEO Mark Golden’s, Great Uncle Leonard Bocour began making hand ground colors for artists.  Mark’s father, Sam Golden joined Leonard Bocour in 1936.  Leonard, a frustrated artist, created a company that was truly part of the arts community.  Sam became the paintmaker and they remained partners until 1972 when Sam retired and moved to a farm in the town of Columbus in upstate New York.  For 7 years Sam tried retired life, but he was restless and in 1979 Mark Golden and his wife Barbara joined Sam to start Golden Artist Colors.

Golden Artist Colors became immersed into the world of mural arts in 1984 with a project for Archie Rand who was commissioned to create a mural depicting the chapter Genesis at the Michlalah Jerusalem College for Women on massive marble walls of the newly created library.  This project included the challenges of adhesion onto friable marble, as well as exposure to the sun of the Middle East!  GOLDEN created whole new systems for Rand to be able to adhere to the marble and this project marked our first use of an Ultraviolet light filter, which has since become a main stay for our mural varnish and topcoat products.

GOLDEN’s next big foray into mural arts was for the massive mural “West and North” by Norman Yates. For this we were able to work with the scientists and engineers at the Canadian Conservation Institute.  This mural was on the West and North side of the Education building at the University of Alberta, quite a difference in temperature from the Middle East!  We are delighted that, because of the care the University has given the mural, it continues to hold up over 30 years from its completion in 1987.

GOLDEN has had the good fortune to make colors for many wonderful mural artists including, William Cochran, Kent Twitchell, Knox Martin, HENSE and hundreds of other mural artists around the world. In doing so, we’ve also had the pleasure of working with and supporting artists and communities that are truly changing the communities where the murals are located.  Some examples include Lori McKinney with the Princeton Renaissance Project in rural Princeton, West Virginia, where we were able to contribute to their “Artist Alley” murals to support their performing and visual arts center in the town. GOLDEN was also involved with Project Row Houses in Houston, TX, whose mission is to be a catalyst for transforming community through the celebration of art and African-American history and culture.

GOLDEN has also had long standing relationships with some of the country’s leading mural art groups and festivals, including the Mural Arts Philadelphia, a program dedicated to the belief that art ignites change, and O+ Festival based in Kingston, NY, a program focused on building long-term relationships between creatives and health & wellness providers to help strengthen local communities. Beyond the United States, GOLDEN has contributed to murals in Bosnia, Haiti, Cuba, Armenia, Russia all to artists and communities that see the art as a path to dialogue and social change.

Over the years, GOLDEN has also been involved in helping to preserve murals that are deemed important by their communities.  GOLDEN’s work with Mural Arts Philadelphia began when we participated in the conservation of “Common Threads”. The mural was originally painted by Meg Saligman in 1998, and it became the iconic mural of the great renaissance of Philadelphia’s mural arts program.  Unfortunately, over time, many parts of the work had colors that failed.  Working with the conservation team at the University of Delaware and their graduate conservation program at Winterthur, we came up with a solution to re-saturate the colors with our MSA Varnish with Ultraviolet Light filters.  Some colors were repainted with our acrylics, and the mural regained its earlier brilliance.  We currently continue to work closely with the Mural Arts Philadelphia program, which is the nation’s largest public art program.

GOLDEN’s history with mural artists, mural groups and mural conservation, including the relationship with Zambia Greene and Jane Golden at Mural Arts Philadelphia, and more recently with O+ Festival, and its director Joe Concra, has all come together as the catalyst for moving forward with the expansion of a line of paint made specifically to meet the needs of mural artists and to address the issues inherent with large scale, outdoor murals. For us the outdoor mural stands as a painting that is subjected to the harshest conditions demanded of any paint system. Our goal was to leverage all of our experiences with murals and mural conservation to address the key problems we were hearing from mural artists, while developing one of the most durable paint systems available.  Since budget for the maintenance of murals is not often available, the most important conservation measure an artist can take for their work is proper preparation and use the best materials available.

Key problems we were working to solve in the creation of a mural specific line:

While the Golden Paintworks Mural Paints have been in use by mural artists for over five years, in large part by Mural Arts Philadelphia, in June 2018, Golden Paintworks formally launched the line of architectural coatings designed specifically for use on interior and exterior murals. Golden Paintworks (GPW) Mural Paints addresses all of the key problems targeted in the creation of this formula and meets or exceeds the performance of the best house paint products available on the market.

We invite you to browse our Mural Gallery of various projects created by artists around the US and Canada.